“By the way, I am about half-way through CITY (in "Anonymous homonymies"). I think I've said this before but I am reminded of Coltrane's "sheets of sound" … an emotionally loaded "complex of occasions" that wipes the slate of norms & principles clean. This is especially true of the more horizontally laid-out poems; the shorter-lined, more vertically arranged poems tend to highlight an edge of humor generally missing from Coltrane's high-energy constructs, that runs like a stratum through all the work: as if the outrageous hilarity of Albert Ayler's sound were a free agent therein, having temporarily left the plateau of church music and marching bands for milieus more cosmic, not to say spacey.

Fred Wah picks up on your quotation from Novalis: ‘to give shape to the earth.’ That's what you're doing, telling us that's our ‘mission,’ each of us being drops of water in a rising sea.”

As an example  (…) of how I see the poems in CITY harnessing the energies released by an unremitting psycho-spiritual engagement with a complex, over-determined field of emotions—the crazy quilt of surplus emotion we patch together every day—I’d single out the last poem in the aforementioned “Part 2: Anonymous homonymies,” entitled: “Resuscitation of the transparent medium.”

To pursue my initial metaphor, sort of, I’d say that one way of reading “transparent medium” (though undoubtedly not the one intended) is as sea water, specifically the surging sea water informing a series of waves that roll across the body of the poem—waves like passing days, that get our mind racing, threaten us with more than we can handle, but again and again break as they reach shore, which is what waves basically do… This poem, like others in CITY, is no more obscure or impenetrable than a wave to-be-surfed, once you’ve heard the wild laughter taunting you not to wipe out:
(click on images to enlarge) 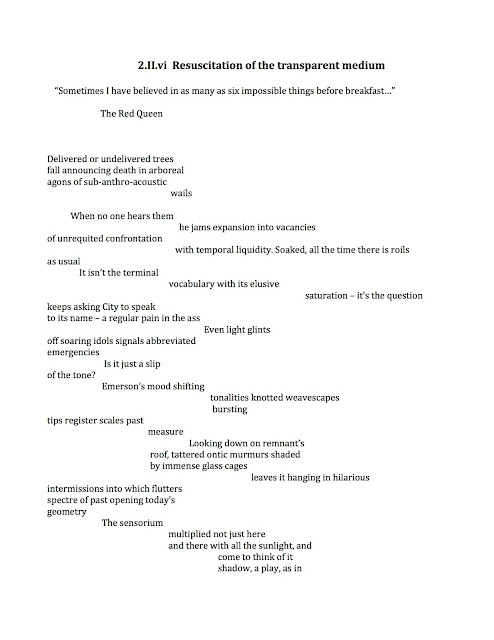 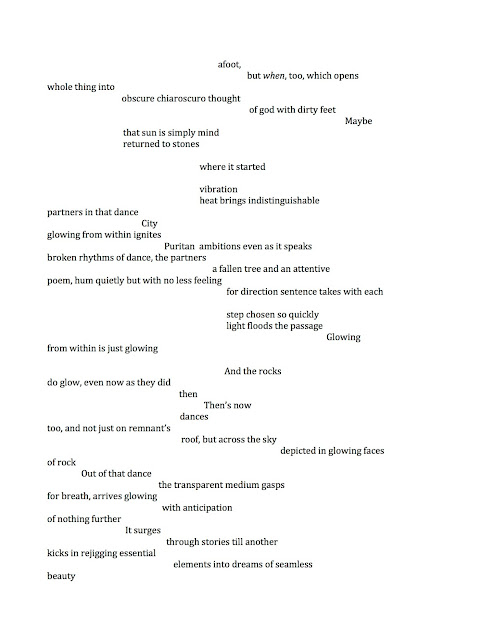 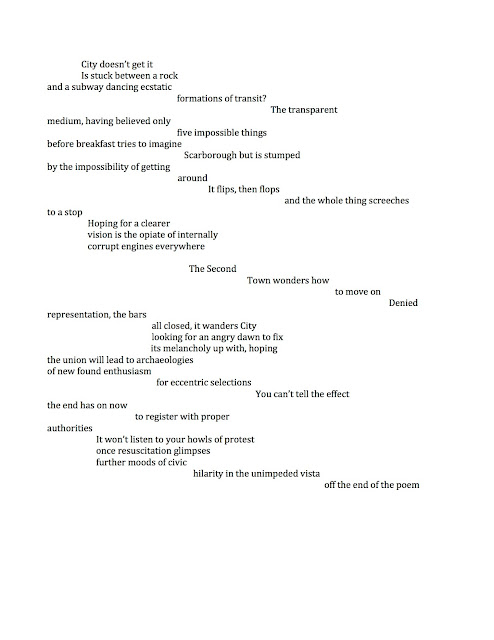 André Spears, PhD (Comp. Lit.) is a scholar-poet, a co-founder and current president of the Board of Directors at the Gloucester Writers Center, and director of its Maud /  Olson Library; he is finishing a six-year tenure on the Board of Directors at Poets House in NYC, and is a contributing editor for Dispatches from the Poetry Wars. His works include the short epic Xo: A Tale for the New Atlantis (1983) and, from work in progress, Letters from Mu (Part I) (translated into French, with an Addendum, under the title En Terre Perdue (2013)), Fragments from Mu: A sequel (2007) and Nexus of Evil: Fragments 1-7 (2009). Recent work has appeared in House Organ, Cough, BlazeVox and Dispatches from the Poetry Wars.