A YEARBOOK by JIM McCRARY

So Jim McCrary was 75 years old at the release of his A Yearbook, an intriguing 1-2 line encapsulation of each of the years from 1941-2016. Cool concept! How did/does he do it?

Okay, his first year of 1941 is appropriately pithy:

Why there. Why that. Was it all white?

For the rest of my read, I chose to pause at certain points of resonance.  Like, 1952, his 11th year, obviously was a turning point during his adolescence:

I watched my brother throw a pitchfork at my dad. Woke me the fuck up.

It’s an ever-more poignant moment since, for the prior year of 1951, he had just expressed the seemingly infinite expanse of the world from youthful eyes:

All day on bikes in a world that has no limits.

Not a false note either with 1959, which also shows just how much McCrary says with so few words:

Yet—and happily so—one senses a lot of living…including enjoyment. And much of it seems literary. I’m happy to see literature can generate enjoyment:

1988
Virginia Woolf seminars where I learned how to like women.

You know who you are and I am that.

He does Zen. He does enlightenment.

It’s a good chap collection with a smart infrastructure. Relatedly, it’s a good life.  A toast to you, Jim McCrary.

P.S. McCrary sent me his photo to celebrate his 75th birthday. It seems relevant, so here: 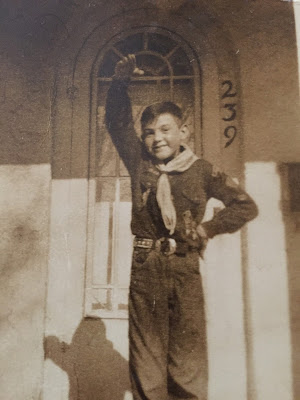