And yet again, I’m left bemoaning my weakness in algebra. But assuming Nikki Thompson is algebraically-deft (at least more than I am), she’s done something I’ve always wanted to do: poeticize  mathematical functions. My favorite section in her Dissection is the series of prose poems that do exactly that—for example (click on images to enlarge), 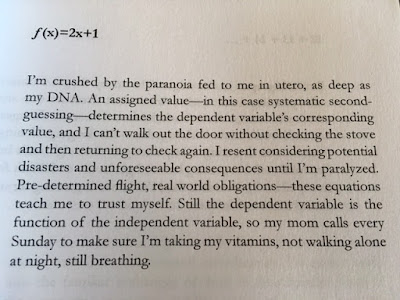 This series, which opens the chap, is an imaginative concept that blossoms pleasingly through Thompson’s poetry.

Also powerful is the last section of prose poems that reflect on her recovery after a stroke at age 31. It’s a haunting portrayal of such recovery as one is forced after the stroke into age-inappropriate situations of being too old or being too young: 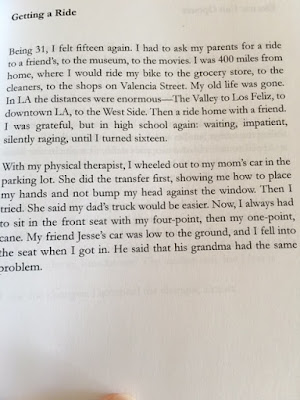 Balance in life is hard to achieve. Trying to find such when recovering from a stroke involves an extra layer of arduity. Thompson’s poems offer lessons while still impressing with their poetic merits.

I found “Bathing” in particular to be moving. While reading this poem, I kept thinking on behalf of the mother—how the mother must have been so distressed by her daughter’s situation even as she tried to hide her distress so as not to inflict it on the daughter. In other words, it’s to the poems’ advantage that the reader finds it easy to inhabit them. Here, Thompson’s straightforward language is helpful—she lets the situation speak for itself; she lets the poem speak for itself: 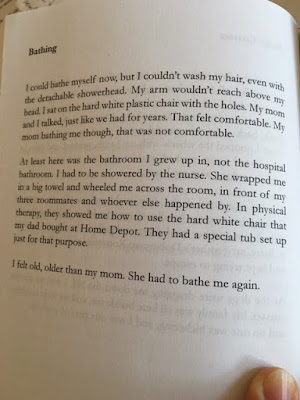 From this last section entitled “Dissection,” one can only be breathless at this bravura last line: “I saw the changes; I accepted the changes, almost.”

I am moved to close by quoting one of the blurbers, Jen Siraganian, who said, “Prepare to be enchanted.” I was/am enchanted by Thompson’s Dissection. That the poetry effects this (for the last section) paradoxical result attests to Thompson’s fine achievement. Recommended for enchantment, and more.


Eileen Tabios does not let her books be reviewed by Galatea Resurrects because she's its editor (the exception would be books that focus on other poets as well).  She is pleased, though, to point you elsewhere to recent reviews of her work: THE CONNOISSEUR OF ALLEYS was reviewed by Joey Madia for New Mystics Reviews, Book Masons and Literary Aficionado; and EXCAVATING THE FILIPINO IN ME was reviewed by Aileen Ibardaloza for "Filipina American Literature: Reading Recommendations" (Barbara Jane Reyes Blog). She released three books and two chaps in 2016, and is scheduled to release at least three publications in 2017. More info at http://eileenrtabios.com
Posted by EILEEN at 6:30 PM