Kim Addonizio’s and Brittany Perham’s shared chap, The Night Could Go in Either Direction, is one of the best-produced chapbooks I’ve seen all year! The form of the poetry chapbook often lends itself to more multi-layered, and just beautiful, results than the poetry (paperback) book and if I were one of the authors, I would be so delighted with the publisher Slapering Hol Press who long has enchanted with its offerings (Slapering Hol Press is one of the country’s oldest chapbook publishers).  The quality of the cover and paper stock is both elegant and warm, the scale at 7 x 10" effects a capaciousness that’s found in the poems, and the addition of Perham’s illustrations enhances the whole project. A. Simply. Gorgeous. Result.  Congratulations to all involved.

The chapbook is also the fourth of Slapering Hol Press’ “Conversation” series which features an opportunity for an established and emerging poet to appear in the same publication, with an interview at the end. Based on this Addonizio and Perham result, long may this series last! For The Night Could Go in Either Direction, Addonizio apparently chose Perham to share the chap’s space after hearing her read some of the featured poems. While the poems are not identified with their authors, I glean from the interview that the prose poems are Perham’s and the others Addonizio’s.  But it doesn’t really matter — and that it doesn’t matter is part of the project’s achievement. The poems were written outside of this joint project and that they work together so beautifully is a lovely happenstance, even as more than coincidence should be at play since Addonizio did recruit the poems after hearing some of them.  Here is the chap's opening poem:
(click on all images to enlarge) 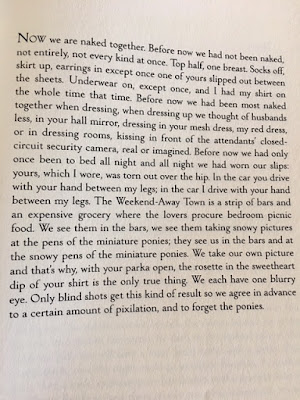 I find it synchronistic that the above poem ends with the reference to “one blurry eye” and “blind shots” because at the end of the chap, at the end of the conversation, discussed is the wonderful notion of “the third thing.” Successful collaborations between two artists often work as 1 + 1 = 3 (or 3+ or 2+), that is, what results is something unanticipated individually based on either party’s contribution. That’s what happened with the two poets’ words that seamlessly share a poignant (and fetching!) tale of a relationship, intimacy, and wisdom.

Here is another sample poem: 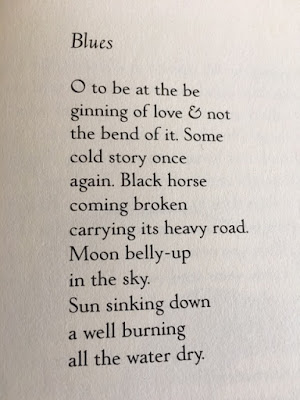 I don’t need to explain this poem which presents itself frankly/transparently, but I do want to note the way the first line breaks before the beginning (no pun intended) of the second line. I see a consciousness of form.

And the interview after the end of the poems is educationally wonderful precisely because so much of it focuses on form versus the narrative unfolded by the poems. Look at this conversational start: 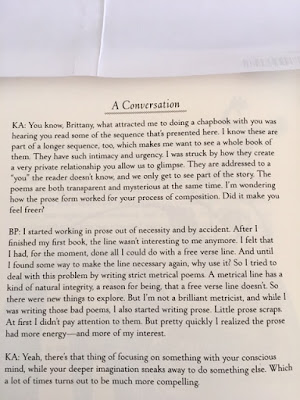 Again, we have the notion of something that surfaces slant — not consciously directed by the poet but that springs up from a “deeper” source. We see this notion also in Perham’s illustrations that so befit the text. Here’s an example: 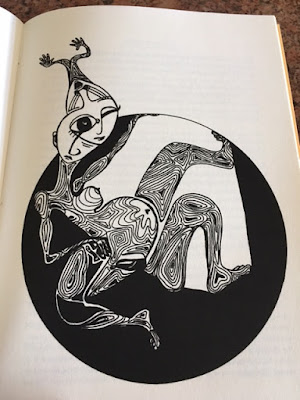