THE RAPTURE OF EDDY DAEMON by DANIEL Y. HARRIS

The parenthetical in the title, “(A Posthuman Homage to Shake-Speares Sonnets),” served initially to this reader both to tempt and repel. Posthuman? Then, one can’t help but think, of course, of Harold Bloom’s bestselling SHAKESPEARE with the subtitle, “The Invention of the Human” wherein (to summarize simplistically) Bloom claims Shakespeare invented the human by presenting characters that develop and not just unfold across the pages.

But Daniel Y. Harris’ book tempts from the sheer audacity of its ambition—it has to be ambitious if it’s going to claim a relationship to William Shakespeare; as well, for a poet not to be ambitious is for a poet inherently to fail. And Harris’ book also repels because, if one sees merit in Bloom’s position, the term “posthuman” seems at first glance to cheaply jump over how “human” in Shakespearian terms never got fixed into a definition that one then can go beyond in a “post” phase.

Well, okay, so that’s been a review of Harris’ book title. I suppose we should continue …

The question logically rises: what is post-human? It seems to me significant that Harris identifies a character, “Eddy Daemon,” rather than rely on, say, pronouns or other devices that might evoke a persona. I believe this presentation of Eddy Daemon to be fitting since posthuman surely does not delete the human in the same way that the word “posthuman” cannot exist without the letters forming “human.” I recall here what Harris notes in “Commandment 613”:

…His negation has always been lit
by eccentricities and personae.

It’s not explicated within the book but the accompanying press release with blurbs indicate something about the poet’s process: terms like “procedural” and “techno-savvy.” Yet Shakespeare is about character and character entails story; as well, there is an underlying storyline to the referenced sonnets of Shakespeare. Is the idea then one of translation? Translating the sonnets into posthuman language? A language that, as befits our times, need not be limited by the limits of the poet’s personal imagination but enhanced by contemporary tools such as Google, predetermined constraints, etc.?

From fairest creatures we desire increase,
That thereby beauty's rose might never die,
But as the riper should by time decease,
His tender heir might bear his memory:
But thou contracted to thine own bright eyes,
Feed'st thy light's flame with self-substantial fuel,
Making a famine where abundance lies,
Thy self thy foe, to thy sweet self too cruel:
Thou that art now the world's fresh ornament,
And only herald to the gaudy spring,
Within thine own bud buriest thy content,
And, tender churl, mak'st waste in niggarding:
Pity the world, or else this glutton be,
To eat the world's due, by the grave and thee.

Here is the first Eddy Daemon sonnet:
(click on images to enlarge) 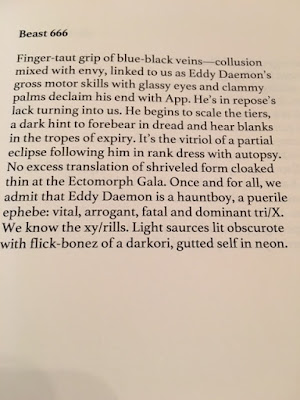 One can see that both serve to present their primary characters, Shakespeare’s young man and Harris’ Eddy Daemon. But there seems little point in more comparisons, if only because the number of sonnets is not the same for each poet. It seems our attention must turn instead—compelled, indeed, by the very first sonnet to turn instead—to Harris’ poetic language or posthuman language.  Content-wise, “Beast 666” implies an Eddy Daemon with “artificial intelligence” as allowed by the technological advances of our age.

The program cannot exist, however, without a programmer and the programmer here is/are human. Harris, the human programmer and poet, presents Eddy Daemon traipsing across the book’s pages and Eddy doesn’t just, to paraphrase Bloom on Shakespeare’s characters, unfold but develops. You see above the book’s opening sonnet. Here’s the book’s last sonnet: 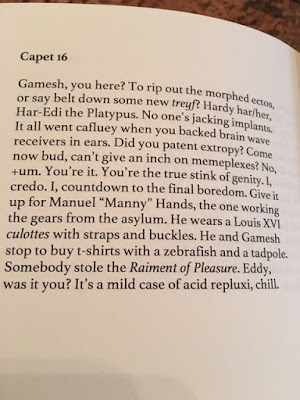 There’s a whole lotta character development between the first and last sonnets. And they reveal the merits of this project: a lively, imaginative, big-expansed language crafted meticulously to always sing. At one point, indeed, I thought Harris songified the internet given the multiplicity of references in his poems. These sonnets seem also to be meant to be declaimed, such is the rollicking nature of their music—e.g., let’s open the book at random for an example: 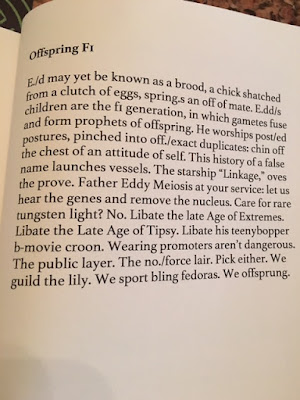 No wonder one of the blurbers, the respected Sheila Murphy, says Harris “has the perfect ear.”

With these nimble and linguistically-fresh sonnets, Harris has succeeded in creating a homage to SHAKE-SPEARES SONNETS precisely for delivering both created language and created character. In addition, through their poetic music, wit and humor, Harris’ sonnets pleased this reader and possibly other readers, which means THE RAPTURE OF EDDY DAEMON hews to what Bloom says about Shakespeare: the author cares about audience. Harris’ caring and care is an invitation to read that a reader would do well to accept. Recommended.