In Natalie Safir’s EYEWITNESS, there amongst others are two poems, “Old Woman Walking by the River” and “The Mountain.” For me, the two book-end the rest of the poems because the poems are, as the book title indicates, of eyewitness.

Here is “Old Woman Walking by the River”: 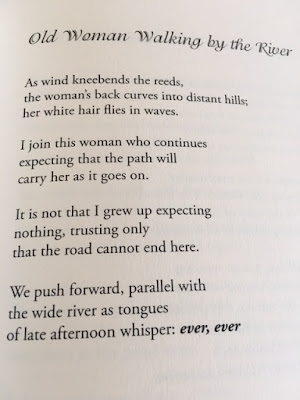 I consider it one bookend because the collection’s persona, the white-haired woman, has moved forward and continues to move forward on the path of life but—and to me this is significant—paralleling the nearby “wide river.” Her position as parallel, perhaps never crossing, the river places her as an observer of the life that might be symbolized by the river.

Here is “The Mountain”: 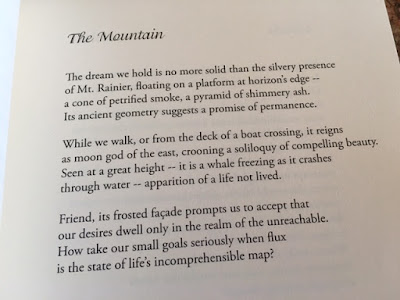 I consider it the other bookend because of its offered hard-earned lesson:

How take our small goals seriously when flux / is the state of life’s incomprehensible map?

Of course, a lot of living—a lot of witnessing—occurs between the two book-end poems. A test, thus, of the collection would be whether the poems also bear  effective (wise) testimony. The above ending two lines would indicate so, and hence we have an astute poem like “Potatoes” which begin

In the dream I repeatedly shop
for groceries at the same market.
…

This time my mother is with me
asking the clerk for a side of beef
and bushels of potatoes.
She is expecting a crowd of people
both of us know will never arrive.
I go along with this madness
because she is a good cook,
I love french fries and I can
easily let chunks of beef
slip to the floor for the dogs.

Am I trying to keep her busy
or feed some larger illusion
we have entered together?

For another example, we also have the moving poem: 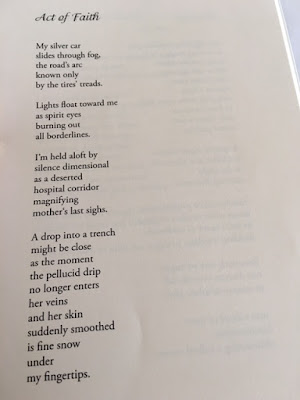 These poems, or many of them, drive from some pain. I’m grateful the poet pushed through to write them with wide-open eyes and determined hand.