THE RED HIJAB by BONNIE BOLLING

By now I've become U.S.-American, which is partly to say the majority of poetry I read are by other U.S.-Americans. But I'm still also Pilipinx, born in the Philippines before coming to the U.S. at age 10. Thus, I am sensitized to contemporary poetry that receives attention because its themes are not (just or mostly) related to U.S.-American culture. For, sometimes, what seems fresh because it relates to another culture is just ... exoticized. Let me rush to say that Bonnie Bolling's The Red Hijab is not in this category, but I did think of exoticization because (1) the poems reflect the poet's experiences of partly living in Bahrain, and (2) the poems offer (deft) observations of everyday life. When I read, therefore, something like


The muezzin makes the air swollen,
Palm fronds cast knife-edged shadows
over the American, who is backstroking
across the long, blue water.
(from "The Compound")


the old Indian with a cloth on his head,
tying rope around his creaking cart
of useless rubble, the fuming
sheik in the vegetable souk
with his wives, and that woman--
(from "Grace, a Moment of")

I take an immediate second look at the poems to ensure those details, so different from what I'm used to in U.S.-American life, do not suffice for the poem's purpose. This perspective is, I understand, a distinctly personal bias on my part, not necessarily applicable to other readers. But it's also a perspective that raises that critical threshold and, by transcending its concern, enlarges Bolling's achievement with The Red Hijab, her second poetry collection which the publisher's press release does present as "inspired by the poet's time in the Persian Gulf."

Bolling's poems do not rely merely on observation. The poet offers insight from such observations--insight that often unfolds slant, which is what makes the poems fresh. The excerpt from "The Compound" which I share above, for example, ends the poem which I share here in its totality-- 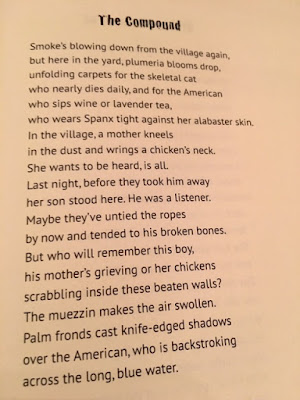 --which is to say, the ending image of the swimming American, by its distance (or indifference)  from the poem's story of a killing that occurred in the village and a grieving mother, serves to emphasize the walls--not just physical but psychological (as well as political and cultural)--between the locals and the expatriates.

As for the second excerpt from "Grace, a Moment of," it is an excerpt that continues directly into explaining "that woman" as


the one who fell in love,
buried to her neck,
face down in the dirt
after the first stone.

It is a story embedded within a poem whose persona wakes at "the sound / of the muezzin's voice" and decides "I want to pray, I think." The uncertainty of "I think" relates to how she'd been previously instructed about prayer--that after leaning down on a rug, knees bent and face down, she then should "wait."


Wait for what, I asked.
Something, they said, you will know.


Save them, I say from the floor, save them all.

What a cry into the night, and yes it is significant that it is cried out "from the floor."

These two poems, rich as they are individually, are part of a collection whose slimness belie its immensity and intensity of experience, language, emotion, insight, colors, and senses. I recommend it not only because it relates to a topic about which not many write within the U.S. poetry world (into which its publication is located). I recommend it because the poems honor the tragedies in the everyday life it offers--"the bruising sky" in the title poem--by presenting their situations' complexities. As such, this reader was not only educated but movingly engaged. The poems relate to the Middle East, and the poems relate to ourselves.