HOW TO HANDLE A BIRD by LAURA CORSIGLIA

Excerpts from a brief correspondence:

I was alerted to your work by an old note in Robin DG Kelley's prefatory essay to Césaire's Discourse on Colonialism: “This essay is dedicated to Ted Joans and Laura Corsiglia with love and gratitude for our ‘Discourse on Thelonialism’” I am interested in your *How to Handle a Bird*, which I understand is a very limited edition artist's book. Are copies still available? [...] I do have a copy of your Our Thang, which is wonderful ...

Thank you for writing -

Thelonialism continues to address the very finest discourse I know - and Our Thang is a part of life in a way I have no way to type.

I do have a copy of How to Handle a Bird.
No digital version exists, just a hand-fitting thing of paper and thread, in an edition of 44.

Is there anything written on Thelonialism? Or that IS Theloniolism? Or is it the kind of thing that only happens between people in person?

Thank you - I’ll send you How to Handle a Bird.

Theloniolism is immediate yet also a lifelong process. One thing to bear in mind is that it is highly melodic.

So while it was the concept of Theloniolism / Thelonialism that first drew my attention to Corsiglia’s work, I walked away with a little handmade poem / book that gently and actually does teach me how to handle a bird. The concept and the book are not unrelated, however. There is a melody to praxis, whether praxis involves handmaking a book or handling a bird. Why does one handle a bird? To wash the oil off. To save its life. And, perhaps, your own. As one handwritten page has it,

the birds
are real
they
bring out
what
is
real

This little text is scrawled sideways across the page. One has to spin the book 900 in order to read it. One can’t just hold this book. One has to handle it.
3.

It is hard for me to know whether How to Handle a Bird is one poem (some parts of which are set in type, while others are handwritten), one poem with illustrations, several poems (one set in type, the others handwritten), or something else very difficult to define. Some pages look like this (click on images to enlarge): 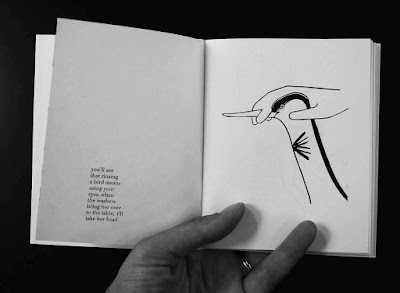 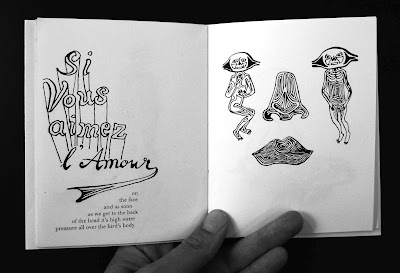 And some (you’ll have to imagine this) have the handwritten/handdrawn material superimposed over the print, like a palimpsest. Therefore I find it helpful to simply consider it an exemplar of the Theloniol way of being in the world, and to approach it as such.

you’ll see
that rinsing
a bird means
using your
eyes. when
the washers
bring her over
to the table, i’ll
take her head
and you hold her
body, keep your
hands around
her wings, try to
keep her keel
up from the
table with your
fingers – many
of these guys
are very thin.
already have the
water running
and check the
temperature
often.

The words “already have [...] temperature often” are printed in smaller type, as if they are an aside, but I notice that later passages that are also in smaller type can’t be read that way, so it’s possible this is just a way to bring some life (some unexpected dynamics, e.g mezzoforte to piano) to what would otherwise be read at the same volume. Perhaps this is an attempt to mimic some of the accidents that occur while speaking. The emphasis here is of course on “possible” and “perhaps”.

The poem continues in the same straightforward vein for the next three pages. Then come four pages of drawings of birds and hands. That is followed by a page of calligraphy, which reads, if my eyes don’t deceive me (and they might)

While I have no problem with this text on its own, I’m a little puzzled by what it’s doing in the how-to-handle-a-bird context. A little puzzled, but not bothered. I think Keats called this not-being-bothered thing negative capability, which I seem to get better at with age. [I do think the ^^^^s are mountain ranges, by the way.]

There is a great deal more of this back-and-forth between the typeset text and hand-drawn text and illustrations. The typset poem ends with

ok hold
on to her lower
back there so she
can’t kick herself
off the table, good
job here’s her leg,
let’s keep going, can
you please part the
wings a little with
your thumbs,
yes

The book has one more leaf. On the recto, a stylized Pacific Northwest bear(?)’s head and a calligraphied list of cities, tho it’s worth noting that Victoria is put under erasure and “replaced” with Victrola. The verso is taken up by a drawing of a woman more or less on all fours, staring directly at the reader.

I’m glad I asked Corsiglia about Theloniolism. Because now I know, theoretically, at least, how to handle an oil-soaked bird. It feels good to have learned this. Given the start the 21st Century has gotten off to, this life-preserving knowledge may come in handy.

John Bloomberg-Rissman has spent the last dozen years or so working on a long project called Zeitgeist Spam. Parts published so far: No Sounds of My Own Making (Leafe Press, 2007),Flux, Clot & Froth (Meritage Press, 2010), the text in A Picture of Everyone I Love Passes Through Me (Lunar Chandelier Press, 2016), and In the House of the Hangman (forthcoming, 2017), which has turned into a 2,000,000-word metatext and which will be published in 9 volumes. Additionally, he “authored” the “conceptual” work 2nd Notice of Modifications to Text of Proposed regulations: Regulation and Policy Branch, California Department of Corrections and Rehabilitation (Leafe Press & Laughing Ouch Cube Publications, 2010). He is also the editor or co-editor of several volumes: 1000 Views of “Girl Singing” (Leafe Press, 2009), The Chained Haynaku (Meritage Press & xPress(ed), 2010, co-edited with Eileen R Tabios, Ivy Alvarez and Ernesto Priego), and Poems for the Millennium 5: Barbaric, Vast & Wild (Black Widow Press, 2015, co-edited with Jerome Rothenberg). His reviews appear regularly at Galatea Resurrects, and he blogs at Zeitgeist Spam (www.johnbr.com).