Kees van Meel’s Wandering in word is presented as an edition of English and Romanian translations of original poems in Dutch. Not versed in Romanian, my response will be to the English translations provided by John Irons, Karen Mansfield, Charmaine Cardon and Toos Bruggeling (with general coordination by Daniel Dragomirescu).

Immediately discernible in the collection is its lovely conceptual underpinning thoughtfully explored through the poems. The beginning is pleasingly transparent, from the title “Wandering in word” to the first poem being “The City” with its “cobblestones turned by so many walking feet.” Further down in this first poem, we read

which is to say, there is life teeming behind even the  most obdurate façade: stone. Thus, in the second poem “Each day” can be the opening lines

only to end with

my first toddler’s step
adjust to the rhythm

of each new step
in each new day

—the same self is the same self that changes as life unfolds.  This is all to say, there’s much philosophizing almost in contrast to the straight-forward language. It’s a welcome layer as it helps the poems stick in the reader’s mind, facilitating a thoughtful resonance.

The poet’s approach creates a landscape throughout the book’s pages that are welcoming to the reader, easy to inhabit. There are the city’s people through poems that are also effective character sketches—a dancer, choreographer, a “benefactor” who is a cook, actors, families, and so on. The collection is also influenced by the poet’s familiarity with the arts—van Meel has a radio program featuring, and writes articles on, artists—and his love for such is obvious in “On Making Poetry”: 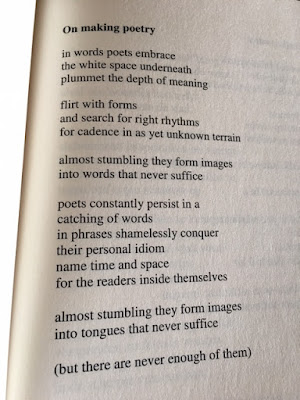 Kees van Meel could have sketched out the outlines of a city (for is not poetry also an art of minimalism?). Instead, his poems breathe out three-dimensional lives and the collection presents an authentic world in which the receptive reader can live. Wandering in Word is poetry that is alive!