THE SONG OF THE DEAD by PIERRE REVERDY

The somberness—often, a bleakness—that I sense in Pierre Reverdy’s THE SONG OF THE DEAD is logical given how the book was written right after World War II. Reverdy wrote it in northern France where he was a partisan in the Resistance Movement. A random opening of the book presents

(from “The thread of fire”)

Yet the work moves me past darkness: there is such grace throughout the collection, translated by Dan Bellm. I almost didn’t want to review this bilingual edition which makes me regret my lack of French. But the English lines are so captivating (which I also mean as a compliment to Bellm’s translation) and … unholy and graceful. For example, let’s open the book at random again—see here: 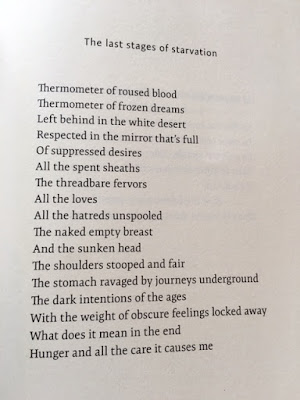 By “unholy,” I think I mean to say the perceiving of things without the veils of paradigms or wishful thinking or other elements that would obscure the reality of what one is seeing. It is a matured type of vision that facilitates understanding. It is unholy because holiness, too, is a veil, even as I raise the concept of “holy” because it is an element surfacing from the spirituality also evident in this collection.  This poem on “the last stages of starvation,” for one, would note not simply a longing for (literally and figuratively) food, but the realization that its lack questions everything about how one has lived (“what does it mean in the end”?). His presentation of—the poem’s beginning as—contradiction enliven this age-old question over the meaning of life...and that any answer is a complicated one requiring deep and prolonged meditation.

The language—in its English—is moving, evocative and graceful, for instance: 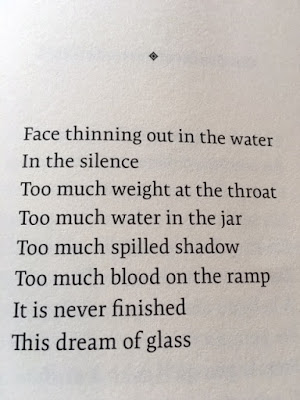 Moving, evocative and graceful—these compliments don’t do justice to the poems because analyses can only approximate the power of these poems which compel multiple readings. While, yes, being "moving, evocative and graceful," the words also are ravishing, ravished and ravish. Here’s another poem that speaks more ably for itself than what I might say: 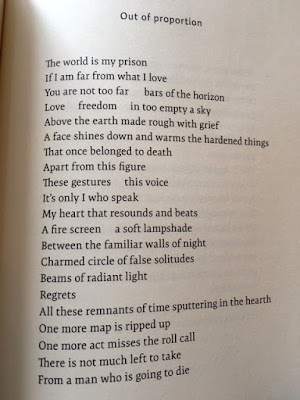 “The world is my prison”—what a killer opening line. What a line, opening or not.  But then to be qualified with “If I am far from what I love”—what an immediately  hopeful note after such an all-encompassing grief-line that describes everything (“the world”) as prison. It’s a genius move from macro (“world) to micro (“what I love” which is not the same as the entire world) that summarizes how life can be  awful and yet such need not prevent the opposite of awful: there are moments to cherish, moments even that are imbued with grace. Elsewhere in the poem:

Between the familiar walls of night
…
Beams of radiant light

Perhaps it suffices, then, to say that I left the reading experience of Reverdy’s THE SONG OF THE DEAD more fully alive than when I first opened the book. Alive, because I was disquieted as much as I was uplifted. To quote from “Beyond this limit,” the collection results in me as

I am more watchful

I choose to believe in the significance of Reverdy’s ending his SONG with a poem entitled “Life pulls me along,” and the SONG’s ending lines