My beloved dog Achilles, at age 13, is experiencing some spine-related issues. When I brought him to a specialist for a medical check, I anticipated that the day would be long. Thus, I brought Richard Berengarten’s 563-page Changing as reading material for the hospital waiting room -- there, I would come across this poem that helped uplift me during that troubled day: 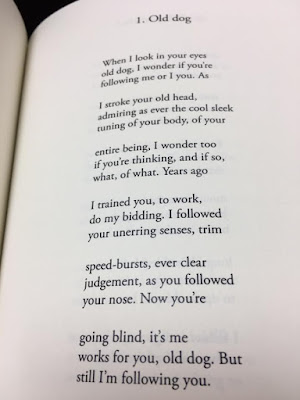 And that is also to say, one of Changing’s strengths is how it manages to be relevant. As an homage to Chinese culture and the ancient text of the Book of Changes or Yijing, Changing is either a long poem or a series of 450 poems. It is sufficiently wide-ranging that there’s bound to be something in there for anybody—and this seems to me to be a fruitful (though  not only) way to consider the book. For me, then, I feel blessed that I came across the poem “Old Dog.”

But in addition to how the specifics of my life orient my reading, Changing also excels because of its many moments of charm. When I first read “Hearing the other smiling,” I was enchanted! 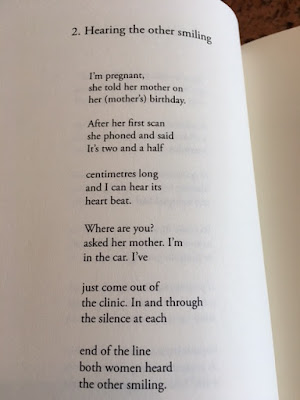 I was impressed by the subtle power of the ending two lines—“ both women  heard / the other smiling”—with the kind of image that lingers long in the mind.

The discovery and sharing the news of one’s pregnancy is a big moment. Berengarten, though, unearths charm in even the most mundane, such as a dust speck (from “Dust Speck”):

I’m you. My own anybody’s dust
speck, you’re filled with scintillating
light. I simply adore you.

I laughed out loud from the improbability of it. But as my giggles dissipated, I realized the slyness of this poem—for the persona could be pulling a Trump-ian “I adore myself” moment if that particular dust speck emanated from the same admiring persona.

And then there’s the craft as revealed by “Poverty”— 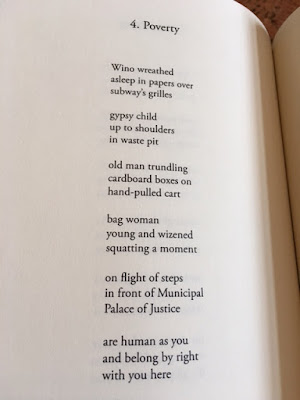 The 5th tercet of the poem is the only one that doesn’t stand alone, relying as it does on the prior tercet. Initially, I questioned that … only to realize that its dependence on a prior description of poverty was what connected it to—and emphasized—the tercet’s reference to “Palace of Justice.” What a smart nuance…

In sum, Berengarten achieved with his poem(s in) Changing what Edward L. Shaugnessy noted in his useful (educational and, in its own way, charming) introduction: poems or a poem of 450 sections that “refresh these ancient images” in the Classic of Changes which inspired the work. Berengarten came across the I Ching when he was a 19-year-old studying English at Cambridge. Fifty-four years later, he wrote Changing—I am tempted to assess by saying, too, that the poet lived the life required to write the poem; if so, that’s another impressive feat.